Sha Na Na has made dozens of records (selling over 20 million) and television shows and are set to celebrate their 50th anniversary with the release of a commemorative recording, “Sha Na Na 50th Anniversary Commemorative Edition” on vinyl and CD, on Pat Boone’s Gold Label.

It was the summer of ’69, it had poured rain most of Sunday, and by Monday morning, everyone still at Woodstock was high and covered in mud, waiting to hear Jimi Hendrix close the show. The stage was sinking and having electrical problems. It was grand and dismal at the same time, and also the biggest break the up-and-coming new band Sha Na Na could have had.

The band had originated as a 12-piece a cappella group at Columbia University. Known at the time as the Columbia King’s Men, they’d been doing a handful of performances a year: freshman orientation, a Christmas party, and an event for the psych ward at Saint Luke’s Hospital. 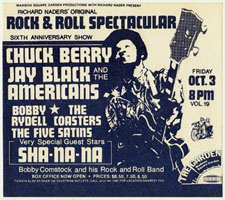 When they stepped onto that iconic stage at Bethel Woods (aka WOODSTOCK), it was Sha Na Na’s eighth gig, but, more importantly, their national debut, opening for Jimi Hendrix.  Their first seven saw bookers stealing half their fees under the table, and sometimes they got 15 minutes on stage and didn’t get paid at all. While audiences seemed to love them, they weren’t sure they’d last another six months.

Steve Paul’s Scene was an underground place that seated maybe 200 people. The club manager said, “Sure, you can play next Monday night. But I can’t pay you, and I don’t know how you’re going to get 12 guys on that stage.”

Well it doesn’t matter how you fit 12 guys on a stage when Jimi Hendrix is in the audience and likes your act.

This humorous mini-biography (included with the vinyl and CD editions) tells the story of how Ivy League greasers made it to the most infamous hippie festival in history, with an in-depth look at the men behind the gold lamé suits. These never-before-told stories, spanning the course of their 50 years as a touring Rock ‘n Roll band, take you backstage at Woodstock, to the dressing room of The Sha Na Na TV show, the set of the movie Grease, and the front row of the Hollywood Bowl… And, of course, perhaps the most iconic moment of Sha Na Na’s career—an exasperated Woodstock announcer, not sure his mic was on, shouting: “Ladies and gentleman, Sha Na Na! Harold, turn up the mic!”

Along with The Rolling Stones, Chicago and a few other bands, “Sha Na Na” www.shanana.com is among the longest running music acts in show business history, dating back to the days when, as fellow college students at Columbia University in New York, they combined their love for the classics of Rock & Roll with a dynamic theatrical approach.

Following their Woodstock stint, up and comers like Jay Leno, Steve Martin, Bruce Springsteen, and Billy Joel have opened for the band in venues throughout the world.

“Sha Na Na” starred in 97 episodes of their own worldwide syndicated television show, released 18 albums and had six songs on the Grammy nominated “Grease” soundtrack. With guests ranging from James Brown, Chuck Berry, and Bo Diddley to Paul Anka and Del Shannon, the TV series proved a hit and went into syndication.

As for longevity, co-founder and drummer Jocko Marcellino says, “Whole new generations are getting swept up in the music of the golden era of Rock ‘n Roll.”

Why Bob Newhart is Staying in Show Business at 91

All rights reserved. 2015-2021 The Digney & Company logo mark and name and all original material in this publication is property of the copyright holder. All trademarks, trade names, and brands are the property of their respective copyright holders. This publication is presented for informational purposes only and has no commercial value or intent and in no way implies any endorsement by any third parties whatsoever. Any omission(s) of photo credits is strictly unintentional.