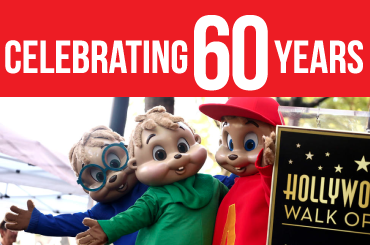 A star on the Hollywood Walk of Fame honoring the Grammy-winning animated singing group Alvin and the Chipmunks was unveiled Thursday as part of the celebration of their 60th anniversary.

The star was accepted by Ross Bagdasarian Jr., the president and CEO Bagdasarian Productions, which produces the Chipmunks projects, and his wife, Janice Karman, the company’s co-president, at an 11:30 a.m. ceremony in front of the Hollywood Toy & Costume Shop on Hollywood Boulevard.

The star is the 2,657th since the completion of the Walk of Fame in 1961 with the first 1,558 stars. The ceremony will be livestreamed on walkoffame.com.

The Chipmunks made their debut with the 1958 novelty Christmas song, “The Chipmunk Song (Christmas Don’t Be Late)” written and sung by Bagdasarian’s late father, also named Ross. The song reached No. 1 on the Billboard Hot 100 Pop Singles chart and won Grammys for best comedy performance and best recording for children at the inaugural Grammy ceremony in 1959.

“The Chipmunk Song” was also nominated for record of the year in a field that also included Frank Sinatra’s “Witchcraft”; Perry Como’s “Catch A Falling Star” and Peggy Lee’s “Fever.” The winner was “Volare,” sung by Domenico Modugno.

Alvin and the Chipmunks are best known for their various television and movie projects. “The Alvin Show” ran in prime-time on CBS in the 1961-62 season. A prime-time special “A Chipmunk Christmas” aired on NBC in 1981. The series “Alvin & The Chipmunks” ran Saturday mornings on NBC from 1983-90 and introduced The Chipettes.

A CGI-animated series “ALVINNN!!! and the Chipmunks” has aired on Nickelodeon since 2015.