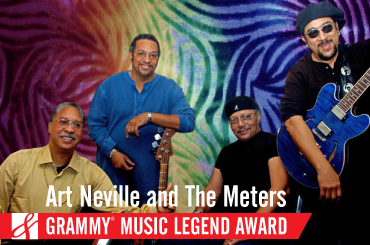 The Recording Academy™ will honor its 2018 Special Merit Awards recipients with “GRAMMY Salute To Music Legends®,” an awards ceremony and live tribute concert on Saturday, July 14, 2018, at Dolby Theatre in Los Angeles.

Digney & Co. client, Art Neville and The Meters appear with other legends on the PBS-produced and aired telecast.

The Meters—Joseph “Zigaboo” Modeliste, Art Neville, Cyril Neville, Leo Nocentelli, and George Porter Jr.—are considered by many to be the founding fathers of funk and, for more than 50 years, they have grooved their way around the globe. They have toured and performed with such artists as the Rolling Stones, Dr. John, Robert Palmer, Labelle, Earl King, Allen Toussaint, and Lee Dorsey. Their trademark sound of syncopated layered percussion intertwined with gritty grooves on guitar, bass, and organ, blends funk, blues, and dance rhythm with a New Orleans vibe that is regarded as one of the most influential in music history. The Meters’ unique place as a touchstone for countless artists across many genres and as one of the most sampled groups in all of hip-hop and pop music, have kept them relevant to contemporary audiences in a way that few groups can claim.

ABOUT THE RECORDING ACADEMY

The Recording Academy represents the voices of performers, songwriters, producers, engineers, and all music professionals. Dedicated to ensuring the recording arts remain a thriving part of our shared cultural heritage, the Academy honors music’s history while investing in its future through the GRAMMY Museum®, advocates on behalf of music creators, supports music people in times of need through MusiCares, and celebrates artistic excellence through the GRAMMY Awards®—music’s only peer-recognized accolade and highest achievement.

Jerry Digney has represented dozens of legendary music industry stars including Art Neville and The Meters. His clients have accumulated more than 150 Grammy Awards.