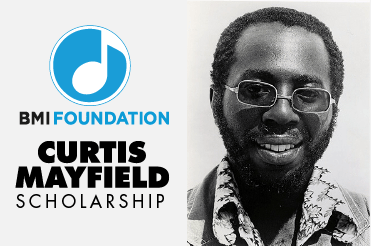 The BMI Foundation, in partnership with the Curtis Mayfield Foundation, has announced the launch of their new scholarship program, the Curtis Mayfield Scholarship. The $3,000 grant, awarded according to both need and musical merit, will be presented annually to an exemplary graduating senior at Chicago High School for the Arts (ChiArts), a public 4-year fine and performing arts school for artistically gifted youth. Preference will be given to students going on to pursue college majors in performance, composition and songwriting.

“We are thankful to the Mayfield family for their generosity and commitment to honoring the legacy of Curtis Mayfield through music education,” said BMI Foundation President Deirdre Chadwick. “This is a wonderful opportunity for the Foundation to expand the reach of our high school-based scholarship programs to Chicago, a city full of young talent with a rich musical history.”

This scholarship program honors the memory of the iconic Chicago-born songwriter, musician and producer whose prolific career and legacy includes such hits as “Superfly,” “People Get Ready,” “Move On Up,” “Do Do Wap is Strong in Here,” and “It’s All Right”, as well as the numerous soundtracks he created for film. The socially conscious soul singer’s music still continues to be a source of inspiration to music lovers and musicians worldwide.

Many of Mayfield’s songs, including “Keep On Pushing” and “We’re a Winner,” became cornerstones of the Civil Rights Movement, often sung as freedom songs during marches, freedom rides and protests. Dr. Martin Luther King Jr. even named Mayfield’s “People Get Ready” as the Movement’s unofficial anthem.

Mayfield first gained recognition and acclaim as a member of The Impressions in the 1960’s before going on to have a successful decades-long solo career. He won a Grammy Legend Award in 1994 and a Grammy Lifetime Achievement Award in 1995. He was a two-time Grammy Hall of Fame inductee, as well as a double inductee into the Rock and Roll Hall of Fame, as a member of The Impressions in 1991, and then again in 1999 as a solo artist.

“Seventy-five years after his birth in Chicago, our beloved Curtis is coming home, in the spirit of who he was, a man of great depth and caring, someone who would take pride in helping young people achieve their musical dreams,” said Altheida Mayfield, the widow of Curtis Mayfield. “We hope that this initial gesture is a way for the Curtis Mayfield legacy to reconnect with his roots and signal a new era of awareness there of his giant musical footprint in the ‘Windy City’.”

The inaugural Curtis Mayfield scholarship will be presented this coming Spring to a ChiArts senior.

About The Chicago High School for the Arts

The mission of The Chicago High School for the Arts (ChiArts) is to provide artistically gifted, diverse Chicago high school students intensive pre-professional training in the arts, combined with a comprehensive college preparatory curriculum. Each year, ChiArts serves 600 scholar-artists across five conservatories: Creative Writing, Dance, Music, Theatre, and Visual Arts — with the goal of shaping them into creators, thinkers, and active citizens whose participation in the arts and culture will enrich their lives and society at large.

About the BMI Foundation

The BMI Foundation is a nonprofit organization founded in 1985 to encourage the creation, performance, and study of American music. The Foundation’s programs include competitive scholarships for songwriters and composers, operating grants for nonprofit arts presenters, and support for innovative music education initiatives in schools and communities across the country. For more information about the work of the Foundation, please visit our website at www.bmifoundation.org. For exclusive news and content, follow @bmifoundation on Twitter and Instagram, and like “BMI Foundation” on Facebook at facebook.com/bmifoundation.