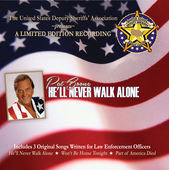 Entertainment Icon Pat Boone, an ardent supporter of law enforcement for decades, is issuing a 3-track recording (www.patboone.com) on iTunes this week featuring law enforcement-themed songs from his vault of many songs recorded over the past 50-plus years. This special edition is produced in association with the United States Deputy Sheriffs’ Association (USDSA) to raise awareness of its nationally offered, law enforcement training program, free to officers.

Boone has personally curated three top songs, all of which he wrote over a period of decades, for this initial offering: “He’ll Never Walk Alone (Empty Uniform),” “Won’t Be Home Tonight” and “Part of America Died,” written 20 years ago, whose opening lyric is, prophetically, “Somebody killed a policeman today.”

Says Boone, “I have the deepest appreciation for those who risk their lives to protect the freedoms that Americans enjoy every day and who are currently under siege.”  In 1998, Boone received the first ever Michael the Archangel Award from the National Association of Chiefs of Police.

Boone has sold over 45 million records worldwide, has 13 gold singles, two gold albums and a platinum album. He’s starred in 15 movies, and has three stars on the Hollywood Walk of Fame.