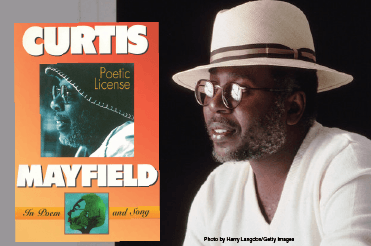 This July will mark the 45th anniversary of Curtis Mayfield’s iconic 1972 soundtrack Superfly. In advance of that, his estate is celebrating the 20th anniversary of the Grammy Award-winning artist’s book, Poetic License.

Being re-released as a limited-edition paperback, Poetic License spotlights poems and song lyrics penned by Mayfield during a career that spanned four decades, from his tenure with The Impressions during the civil rights era to his groundbreaking solo turn. Among the collection’s 60-plus songs are such classics as “People Get Ready,” “Keep on Pushing,” “The Makings of You,” “Sparkle,” “Pusherman” and “Freddie’s Dead.” In addition to an introduction by Mayfield himself, the 72-page collection features color illustrations by David Soto.

Poetic License was Mayfield’s first project after a 1990 stage accident — in which he was hit by lighting equipment — left him paralyzed from the neck down. “It started him back to work and that’s what I wanted,” Mayfield’s widow Altheida tells Billboard.  “I wanted him to get his mind off the accident, and remember that he still had a functioning mind. From that point on, he was anxious to work. You couldn’t slow him down.”

After the book’s publication, Mayfield went on to record and release his final album, 1996’s New World Order. He died in December 1999 at the age of 57.

Poetic License is available for purchase at www.curtismayfield.com.